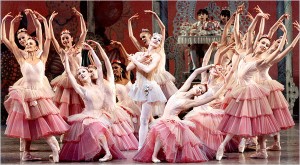 This past Saturday, the New York City Ballet performed its greatest hit The Nutcracker at Lincoln Center. Choreographed by George Balanchine, founder of the New York City Ballet, The Nutcracker transformed the David H. Koch Theater into a thrilling winter wonderland, complete with toy soldiers, mice, waltzing snowflakes and stunning dancing. The two-hour performance also featured a Christmas tree which grew from 12 to 40 feet in mere seconds, and a flying sleigh which carried two children through the air in the finale. The whole performance was breathtaking.

Adam Morgan, a retired conductor, exclaimed that “the New York City Ballet has never let me down! The dancing was truly breathtaking and the costumes brought a twinkle to my eyes.”

“The Nutcracker” is the last of Tchaikovsky’s ballet trilogy, following “Swan Lake” and “The Sleeping Beauty.” It is the most popular classical ballet in the world, and exists in hundreds of different choreographic versions.