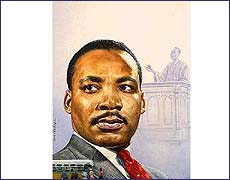 One could say that the Great March on Washington parallels the march through time of the history of slavery in America. The first slaves were brought to the new found continent of America in 1619 when the first European settlement of Jamestown was established. Over 200 years later the issue of slavery was so explosive that it led to one of the bloodiest conflicts in history, the American Civil War.

In today’s world it might be hard to understand the tremendously revolutionary idea the freeing of the slaves in the south was. Even more incredible was President Abraham Lincoln’s speculation on how the African-American population could be enfranchised into the general population through enactments of laws giving them full citizenship and the right to vote.

In an almost 100 year-old letter written by Lincoln and found in the Shapell Manuscript Foundation collection, Lincoln proceeds cautiously in his support for black suffrage due to the fear that southern states, in this case Louisiana, would completely rebel at the idea of giving the blacks the vote, hindering the delicate process of reconstruction.

Lincoln’s letter, written to Michael Hahn, then candidate for Governor of Louisiana reads as follows:

Hon. Michael Hahn
My dear Sir:
I congratulate you on having fixed your name in history as the first free-state Governor of Louisiana. Now you are about to have a Convention which, among other things, will probably define the elective franchise. I barely suggest for your private consideration, whether some of the colored people may not be let in – as, for instance, the very intelligent, and especially those who have fought gallantly in our ranks. They would probably help, in some trying time to come, to keep the jewel of liberty within the family of freedom. But this is only a suggestion, not to the public, but to you alone.
Yours truly,
A. LINCOLN

Now fast forward to 1963. It is almost exactly 100 years since the end of the Civil War and Lincoln’s letter. African-Americans are still fighting for civil liberties; the vote; educational and economic equality. On August 28 of that year Dr. Martin Luther King, minister and civil rights activist, climbs to the podium in front of a quarter million people from all walks of life and from every state in the land, and makes one of the most memorable and quoted speeches in history. With great emotion, bringing tears to the eyes of many in the crowd, King tells his enthralled audience,

“I say to you today, my friends,   even though we face the difficulties of today and tomorrow, I still have a dream. It is a dream deeply rooted in the American dream. I have a dream that one day this nation will rise up, live out the true meaning of its creed: “We hold these truths to be self-evident, that all men are created equal.”

Today, fifty years later, the United States of America has continued marching since the Great March on Washington, electing an African-American president. The struggle has been long, and the journey is not yet over, but we can still be proud that we are marching in the right direction.