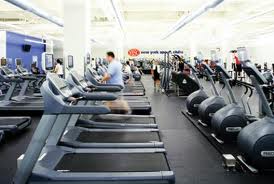 While some might argue this is capitalism at its best – it definitely gets an “A” for creativity.  The New York Sports Clubs, (NYSC) which includes 160 sports clubs around the world (108 of which are in New York), is offering a “Train Like a Tribute.” With The Hunger Games movie opening and sweeping the nation, the clubs are offering a fitness program that matches that found in the movie.

Designed by Eric Salvador, a former Marine and one of the creators of NYSC’s Ultimate Fitness Experience (UXF), the new program will include a 50 minute class that mirrors the competitive spirit and energy of The Hunger Games.  The cardio and weight-training exercises will include “Katniss Kickbacks,” “Sprint to the Cornucopia,” and “Peeta Presses.”

At the end of each of the “Train Like a Tribute” sessions the trainer, coined the “Game Maker” will then declare one of the students to be the workout winner.

"Knowing that the Hunger Games is all about survival of the fittest, we chose to model the workout after the New York Sports Clubs' UXF classes which subscribes to the same 'ultimate athlete' mentality.”

He continued, “Similar to UXF, the heart of the 'Train Like a Tribute' Workout is a 15-minute metabolic conditioning circuit that combines one exercise from each skill set into a non-stop, high-intensity workout routine."

For those of you who belong to the New York Sports Club, you can be part of the “Train Like a Tribute” workout in Brooklyn, other areas of New York, Boston, Washington D.C. and Philadelphia this week.  The class is going to be free of charge for members and non-members like into April.