The Children’s Galleries for Jewish Culture was founded in 1995 as the Jewish Children’s Learning Lab. Its mandate was to create new and exciting ways to engage and inspire children and their families to a greater appreciation and love of Jewish culture. Using the proven methods of other highly successful children’s museum’s the CGJC strives to bring the rich heritage of the Jewish people to life for its visitors.

1996 major donations allowed the Jewish Children’s Learning Lab (JCLL) to create the exhibit “From Home to Home: Jewish Immigration to America.” “Home to Home” is traveling exhibition which is entirely interactive for children ages 6 thru 12. Since it opening at the sol Goldman Y of the Educational Alliance “Home to Home” has educated and inspired children in 14 communities throughout the United States. Thirty five thousand children and adults and 250 school groups visited “Home to Home” and it was refurbished in the year 2000. 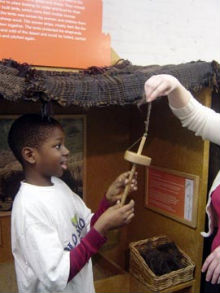 From Tent to Temple: Life in the Ancient Near East

In 1999 the JCLL finished developing their second traveling exhibit, “From Tent to Temple: Life in the Ancient Near East.” Its opening was in the new Yeshiva University Museum at the Center for Jewish History. “Tent to Temple” was seen there from Spring 2000 until January 2001, when it changed venues to Overland Park in Kansas and then traveled to the Wyoming State Museum in Cheyenne.

The JCLL opened a new space in February, 2002 in the gallery district of Chelsea in New York City. The space has 3400 square feet in which the newly named Children’s Galleries for Jewish Culture can better offer their exhibitions and many innovative programs to audiences in the New York area on a yearly basis.

Go Explore and Play at the CGJC

On May 29 from 2pm until 5pm the CGJC will allow visitors to create beautiful “ancient” jewelry with beads and sheet metal. Participants will build a miniature scene from life in the “old country” and families can also enjoy the two exhibitions at the Galleries.