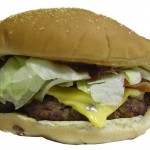 It’s a fight to keep your cholesterol up.   The 2nd Ave Deli is fighting to keep the name on one of their more famous sandwiches.   This near 60 year old establishment in Manhattan is getting heat — not just from its kitchen — but from an Arizona grill called the Heart Attack Grill.

The Arizona grill has won similar court victories in the past, while trying to protect its brand and its fat-guzzling name.

No Need for Confusion

The Manhattan deli, however, has asked a federal judge to declare that its kosher sandwich is not, in any way, an imitation of those in Arizona.   They argue that there is simply no reason for concern, since confusion for customers is nearly impossible.   Since the 2nd Ave Deli is kosher, there is “no likelihood of confusion” since the foods at the two eateries “could not be more different.”   Therefore, they’ve asked the judge to declare that they didn’t violate the Arizona restaurant’s trademark by using the same theme for their sandwich’s name.

Certainly, the sandwiches are far apart in design, if not in name.   Time with tell if the 2nd Ave Deli is allowed to continue selling their sandwich, or if they will have a heart attack with the ruling against them.