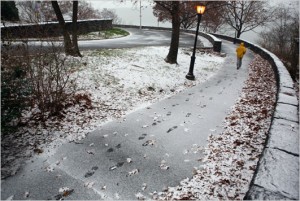 New York City is suffering frigid cold like it has not seen in over a decade. The temperature has gotten as lower than 11 degrees in the morning, with wind chills that make it feel as cold as -50 degrees. In areas upstate, western Pennsylvania, Vermont and New Hampshire temperatures have reached as low as negative 25 degrees.

The National Weather Service has cautioned New Yorkers to be aware of the risk of frostbite and hypothermia. Two deaths have already been recorded in the area.

The tough temperatures are expected to continue after another snowstorm, and schools have been opening late and even canceling classes because of the weather.