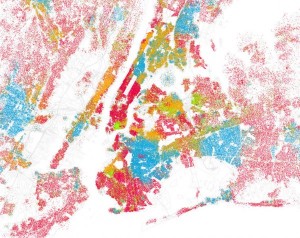 Ever since Israel Zangwill popularized the term “Melting Pot” with his play which was produced over 100 years ago, New York has been known for its amazing diversity and neighborhoods possessing distinct ethnic flavors. From Chinatown, Little Italy and Jackson Heights, immigrants have made New York the exciting, surprising and appealing place that it is.

This fact is even truer now than ever, and is soon to be officially confirmed when the census of 2010 is released in about a month. We can expect the census to show a record number of New Yorkers born outside the U.S.

Last month the American Survey released data which showed an interesting metamorphosis in neighborhood composition which has been going on over the past ten years; that is that enclaves which have been traditionally made up of a certain ethnic group have been spreading into neighboring communities. This has caused previously one color neighborhoods to take on the speckled appearance of more mixed communities, creating a less ‘all-white’ or ‘all-black’ atmosphere there. Its just one more way in which there is a unique New York.