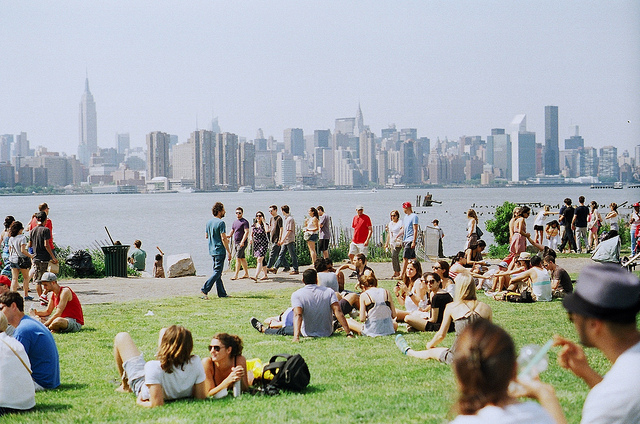 The dog run at Williamsburg’s East River State Park launched an innovative program to achieve two goals at once: rid the dog run of doggie do while simultaneously creating potent fertilizer to feed

the flower beds in the 11-acre park.

Leslie Wright, the regional director of state parks in New York City explained how the idea was hatched:

“We figured we can use something people don’t want and turn it into something great,” he said.

Wright helped get the program, which is the city’s first, off the ground. He guessed that the cost of the project, including all the materials and other supplies, would come to about $2,000.

Dog owners are asked to collect their dogs’ waste using one of six styles of pooper scoopers and brown, environmentally friendly bags, supplied by the park for free, and dispose of it into one of two new, wooden compost bins. The doggie do is then mixed with untreated sawdust and “cooked and cured” before being applied to the park’s gardens.

Park officials say they picked the Williamsburg neighborhood to launch the program because they felt the residents of the area would be especially excited about the idea.

“I think it’s pretty in tune with the whole Brooklyn vibe,” said one dog-owner, walking in the park with her boyfriend’s golden doodle.

“I think it’s great. Not only does it save me money on bags, but it’s also super easy to do,” said another dog owner. “But I’ve definitely seen a lot of people roll their eyes when they see it.”

Wright mentioned that this program is one of only three like it in the country. The others are located in Robert H. Treman State Park in Ithaca, New York; and in Alaska’s Denali National Park, especially for sled dogs.