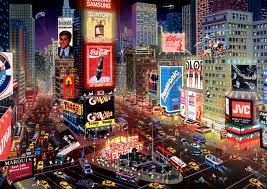 The modern re-development of Times Square may have taken thirty years but it has reaped benefits for the area and for all of New York making it well worth the effort.
Crime is way down, with the complete disappearance of drug addicts, dope pushers, pimps and prostitutes from the vicinity. Tourists are visiting now in droves with a 74% increase since 1993 reaching an amazing 36.5 million tourist visitors in 2010. Broadway shows are one of the big winners of the re-vitalization with attendance soaring to 12 million last year.

But, Professor Sagalynn said, “Times Square is an example of how a city was able to think on a grand scale and carry it out.”

“It can take a decade or two for the complete vision to become a reality” she continued. “But it happened here.”