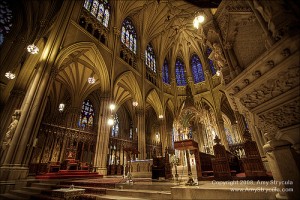 St. Patrick’s Old Cathedral, located in old New York at Prince and Mott Streets in NoLita, was elevated to basilica status on Sunday. The church is the first Roman Catholic cathedral to be built in New York City two centuries ago by the same architect who designed City Hall.

The title brings with it certain responsibilities and privileges, but the inauguration was mainly a means to recognize the church’s history. It has been visited by generations upon generations of Irish, Italian, Hispanic and Asian immigrants, as well as orphans and soldiers. It symbolizes the history and development of that whole area of New York, and was a witness during the times when ships still crowded the harbors, and immigrants and artists barely survived in cold-water flats and lofts.