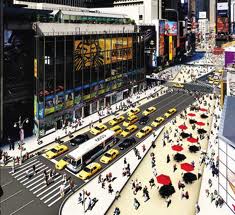 As a result of the past thirty years of persevering development the Times Square area is now one of the highest rental districts in New York, commanding rents as much as $1,400 per square foot, second only to rents in snazzy areas like some of the chicer stretches of Madison Avenue or Fifth. Some of the world’s most renowned companies have headquarters in Times Square, including Morgan Stanley, Allianz Global Investors, CondÃ© Nast and Viacom.

Remembering back to 1979 many of the trademark billboards which define the special “Times Square look” were actually empty. Today, the excitement of the collage of moving adverts, pulsing neon and spectacular signs punctuate the creative life which has been brought back to the area. Some of the rental space on 1 Times Square’s faÃ§ade requires $4 million to put up your name in lights for one year.

According to Tim Tompkins, the president of the Times Square Alliance, the transformation is nothing short of astounding.

“The irony is that this place represents in many ways the epitome of free-market capitalism. But its transformation is due more to government intervention than just about any other development in the country.”