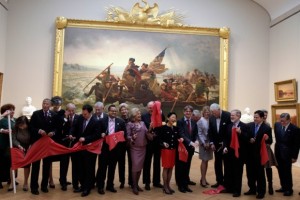 New York’s Metropolitan Museum of Art is finally opening its collection of American paintings, sculpture and decorative arts. The American Wing’s collection features works from the 18th through 20th centuries.

The renovated exhibit now displays all works on a single floor in a chronological and thematic order. The galleries are located in 26 rooms that feature coved ceilings, skylights and cornices which add to the hushed but elegant atmosphere. The American Wing’s renovation began ten years ago, and cost $100 million in total.

Chairman of the American Wing Morrison Heckscher said the galleries “are so elegant, stately and serene that they almost make one speak in a whisper.”

The wing opens to William Rush’s enormous carving of an eagle in flight, which faces the 150-foot corridor that is the heart of the galleries and at its end, one of the most famous American paintings: “Washington Crossing the Delaware” by Emanuel Gottlieb Leutze. The painting, which measures 12 by 20 feet, hangs alongside “The Heart of the Andes” from 1859 and “The Rocky Mountains, Lander’s Peak” from 1863.

The double-sized gallery also features several impressive Hudson River School landscapes by artists including Thomas Cole, Jasper Francis Cropsey, George Inness and many others. The redesign of the gallery expanded the space by 3,300 square feet. However, Heckscher explained that “the key here is not the number of pictures on view, but the quality.

“The design allows for hanging any of these paintings in a congenial setting where the proportions, the light, the scale, everything allows for the works to be shown to advantage.”