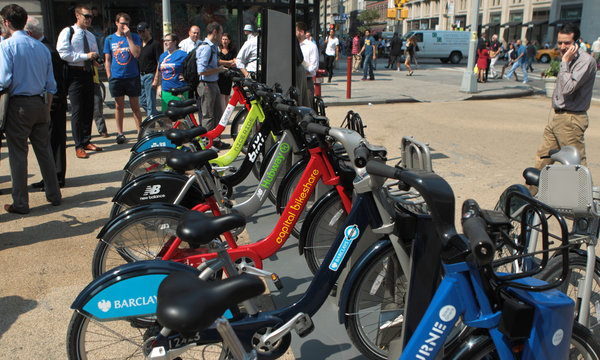 If you’re hoping to get on your bike-share bicycle and ride anytime soon – you might need to find an alternative means of transportation.  That’s because the ambitious Bloomberg administration bike-share program that’s coming to New York City and Brooklyn is getting postponed until summer 2012.

The goal of the program is to become the largest bike-share effort in the country with 600 rental stations and 10,000 bikes in total.  Alta Bicycle Share has been selected to run the program.  The bikes that were on display during the news conference at a pedestrian plaza in the Flatiron district showed that they aren’t built for speed. They have only three gears and are quite heavy.

The idea of the program is for participants to purchase memberships that would include trips of up to 45 minutes.  For additional fees participants could have longer trips and more usage.  A yearly membership should cost less than $100, but not all of the pricing details have been worked out yet.

There are supposed to be rental stations in Manhattan and in neighborhoods around Brooklyn. The program is still seeking private sponsorships, as the program won’t be sponsored by the city but by membership fees and sponsorships.

Alta Bicycle Share is now looking for approximately $50 million to run the program, and is seeking a maximum of four sponsors for this effort. The most controversial part of this program has been the location of bike-sharing stations.  The Department of Transportation has made it clear that the winning bidder can’t take up too many parking spaces with the bike stands or excavate streets.

Having won the contract, Alta Bicycle Share will now have its share of work.  They run similar programs already in Washington and Boston as well as those in Melbourne, Australia.

Picture by Chang W. Lee from The New York Times