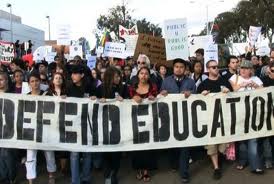 Back in the 70’s CUNY students had a reputation for unrest and uncivilized protests. In 1970 students turned off elevators at Hunter College and took over the cafeteria, offering free food to all. Police with helmets were called in and classes were suspended. Finally the year of reckoning came. In 1976 the end of free tuition at CUNY was at hand. Students reacted with street marches in Harlem, three days of class boycotts, and 13 English faculty members began a hunger strike.

Thirteen years later, in 1989 another threat to raise tuition led to students at City College pouring glue and toothpicks into 400 locks on classroom doors. Traffic across the city was blocked by students, while administration buildings were seized. In 1991 more threats of tuition hikes led to more open protests, canceling classes and delaying commencement exercises.

More recently protests have been remarkably more civilized, limited to shouting at meetings and organized marches and rallies. In almost no cases have any actual laws been broken nor has mayhem ensued.