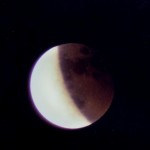 Early this past Tuesday morning, while most of the residents of New York slept soundly, the moon was completely covered by Earth’s shadow. The whole process took around three and a half hours. The moon was   hidden for 72 minutes. The phenomenon was clearly visible only in certain areas of the North and Central America.

Total lunar eclipses occur when Earth casts a shadow over the entire moon, and blocks the rays of sun that would otherwise reflect off its surface. This year, the eclipse coincided with winter solstice. The last time the events occurred simultaneously was in 1638.

The total lunar eclipse will occur next in June of next year, and will not be visible from America.