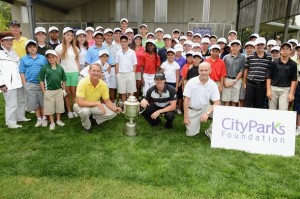 Brooklyn’s junior golfers were thrilled to participate in a once-in-a-lifetime golfing lesson with the legendary Rory McIlroy this week. Barely a week after winning the P.G.A. Championship, the king of golf traveled to New York to prepare for his upcoming trial at the Barclays golf tournament on Long Island. During his stay, he opted to spend several hours teaching some amateurs a few tricks of the trade.

Having established his career through modest means, McIlroy could undoubtedly relate to the excited faces surrounding him on that sunny afternoon in Brooklyn.

“I remember how much it meant to me when a top golfer showed any interest in me” he said. “I still recall what that felt like. I just want to put some smiles on some faces.

“New York is my favorite city in the U.S.” the Northern Ireland native said. “I love the buzz and atmosphere. We said: ‘Let’s do something fun for the city and its golfers.’”

The golf clinic took place at the CityParks Foundation’s junior golf center near the Dyker Beach Golf Course. It included plays with McIlroy, tips, demonstrations, and even one-on-one sessions with each of the participants. The pro spoke about putting, chipping and practice ideas, and helped each junior with his or her swing tempos and grips.

“Some pros might choose to help themselves on a day like this” Tos said. “I’m really gratified he chose to help us. He’s going to inspire many of us to keep playing just by being here.”