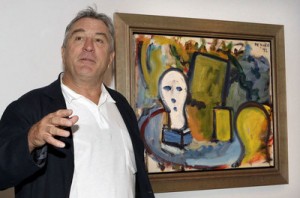 Robert De Niro, Sr. was a successful artist, and when he died of prostate cancer in 1993, his estate was entrusted to art dealer Lawrence Salander. However, last year, Salander was imprisoned for fraud, prompting De Niro, Jr. to take more interst in his father’s art legacy. Prosecutors claimed that bosses at Salander- O’Reilly Galleries sold paintings without consulting with the Hollywood star, and failed to deliver the profits from these sales, as well.

The actor had lawyers working to recover several pieces from his father’s collection over the course of two years. De Niro admitted that he learned a valuable lesson from the experience. “You have to be on top of everything to make sure it’s done right. At that time, I thought Larry would take care of it. It didn’t work that way.”

De Niro has since turned his father’s apartment and studio in Manhattan into a private museum, hiring art advisors Megan Fox Kelly and Jeffrey Hoffeld to research his father’s work and to talk to museums about setting up a new exhibit. De Niro’s non-profit Tribeca Film Institute has also provided a $25,000 annual prize to reward a “mid-career artist” in his late father’s name. Kelly explained that “Jeff really thought that it was something that was needed in the art world. We presented the idea to Bob and he loved it.”