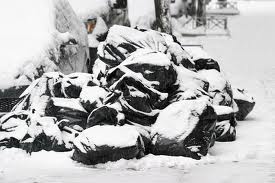 Ten days have passed since the last time garbage was collected off the streets of New York, on Christmas Eve. Despite the fact that the garbage in some places is forming towers threatening to topple, creating an eyesore and health hazard, the Sanitation Department announced that it will only be able to reinstate residential garbage collection in a limited fashion for now.

Garbage removal is due to resume at 7am on Monday morning, but only 50% of the garbage trucks are available for this crucial task. This is because, according to Keith W. Mellis, a spokesman for the department, “We still have 50 percent of the trucks out for snow-clearing operations.”

“We will be behind” Mr. Mellis acknowledged. “We’re going to be working on Monday’s material on Tuesday. As soon as we finish Monday’s, we’ll get to Tuesday’s.”

The situation is quite reminiscent to many New Yorkers of how the snow itself was treated, or rather ignored. This is how one New Yorker expressed his frustration. “It will be just like the snow” he said. “God knows if they’re ever going to come.”