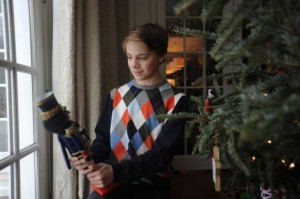 Addison Albano, a thirteen-year-old student at Brunswick School, has just performed with the American Dance Theater as “Fritz”, one of the main characters in The Nutcracker. He was very excited to have a part in the esteemed show. The ballet began on December 22nd, with fifteen performances during its ten-day run at the Brooklyn Academy of Music.

“It’s a world premiere and I love performing, it’s my passion” he explained, when speaking of the ballet. “Just to be a part of something this big is amazing and fun.” Addison’s mother Kelly said his love for the arts was apparent from a young age. “I had taken him to a performance years ago of Aida, and he loved it right away. He told me ‘I’m going to be up there on that stage someday”™” she said. Addison started out as a gymnast, and after a few years of competing he switched to dance. Kelly shared that Addison’s life is very stressful and disciplined, as ballet training demands a lot of his time. “He has to leave school, travel to the city, and then train. And that’s often three to four hours and then he has to do his homework after.”