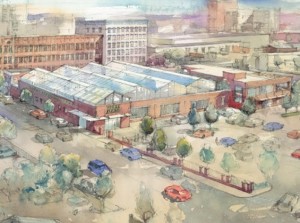 The road to Brooklyn has been long and arduous, but it looks like Whole Foods, the upscale, health-conscious mega grocery store has finally arrived.

Board Approval Paves the Way

After almost eight years since purchasing the property where Whole Foods hoped to build a store, the company has finally overcome what appears to be its last hurdle; approval from the city’s Board of Standards and Appeals for zoning changes which will allow Whole Foods to build a store about 5 times larger than what the present zoning regulations would approve.

The board voted 5-0 to allow Whole Foods to build a 52,000 square foot grocery store along the banks of the Gowanus Canal, at Third Avenue and Third Street.

The board’s approval gives Whole Foods the green light to begin construction this spring, with an eye to opening in about a year after that, in early to mid-2013.

“We’re really excited” said spokesman Michael Sinatra. “We should be able to get this construction started very soon.”

When Whole Foods bought the site in 2004 officials had no idea how long it would take to finally begin construction. The first major set-back was the discovery of leaky oil tanks buried there, which threatened to halt construction completely since the soil around the tanks were found to contain carcinogenic chemicals. Officials continuously changed their minds about whether or not they would ever build there, but finally they declared the site was cleaned up, and the process of building a store would move onto the next stage as fast as possible.

“We obviously purchased this with the anticipation of opening years ago and a number of things have delayed the project, but we put the project back on track” Sinatra said.

The next obstacle was the neighbors, who did not look kindly on the store’s plans to have a huge parking lot in addition to rooftop parking. The final plan cut the store’s internal space by 25 percent, with a reduction in the number of parking spaces from 430 to 248. On the roof Whole Foods is planning on constructing a greenhouse where organic produce will be grown and then sold in the store.

All is still not well, however. Opponents such as the Gowanus Institute are worried that such a large store will have an adverse effect on small businesses and manufacturing which has been the focus in the neighborhood for many years. The Institute drew up plans for an industrial park for small businesses as an alternative use for the site which Whole Foods purchased. Their reaction to the board’s approval was one of “disappointment in the decision to allow Whole Foods to build a large, suburban-style retail food market in a neighborhood that has been a haven for well-paying manufacturing jobs protected by New York City’s zoning laws and economic policies.”

“It is clear that if built, the retail development will indeed forever alter the essential manufacturing character of the Gowanus neighborhood” the group said in a statement.