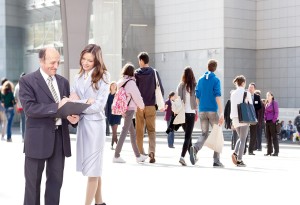 Head of Wells Fargo Advisors Mary Mack has been meeting with teams from New York’s Credit Suisse Group AG in an attempt to bring brokers into their firm. This, at a time that Credit Suisse is decelerating its American private-banking operations due to not having “the necessary scale to sustainably compete without significant investment or acquisition.” Ultimately it is hoped this move will help Credit Suisse raise $6.3 billion in fresh capital while scaling back its investment bank and reducing the amount of jobs it has.

Wells Fargo is said to be offering some exceedingly “competitive” deals for their Credit Suisse counterparts. Packages will pay the new staff members “300% of their annual fees and commissions, with 150% given initially and up to another 150% earned over several years if certain metrics are hit.”

Not everyone from Credit Suisse will take up the Wells Fargo offer though. For example, CEO of Credit Suisse, Philip Vasan will not be solicited for this deal and will thus remain at Credit Suisse in his current position. Rather his role will become more focused on the company’s transition.

For Wells Fargo staff to receive the offer, they will be flown to company HQ in St. Louis and meet with personnel to get better access to the firm and its products and culture, needed since there is currently quite a broad difference between the two firms. Also it’s not a done deal that just because Credit Suisse is downsizing, they will automatically move over. According to President of Rick Peterson & Associates (a brokerage recruitment firm), Rick Peterson, “Credit Suisse’s brokers have a chance to look at the competitive landscape. The logical place to go would probably be one of the four major firms” indicating that there is no reason why they should not also be reviewing attractive job vacancies at Merrill Lynch, Morgan Stanley and UBS.

That said, it does seem there is an advantage for these people to choose Wells Fargo. This is partly because they will not have to comply by the rules that usually dictate broker transitions from one firm to another. They will not have to provide as much documentation to clients that is usually the case with a move from one firm to another. Thus, according to Head of Wealth and Investment Management at Wells Fargo, David Carroll, this makes the arrangement most “unique.”

Ultimately Peterson concluded: “The Credit Suisse brokers have a tremendous cache in the high-net-worth marketplace. Wells Fargo will do anything they can do spearhead their entry into that.”