As September 11 approaches, the list of tenth anniversary memorial events seems to grow longer. Beginning to today and continuing until Sunday and beyond, here are presented just a small summary of the options for remembering on of New York’s most excruciatingly painful moments. 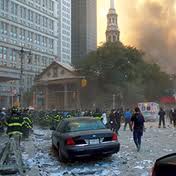 –       White ribbons will be tied by the public in an event of remembrance and honor on the fence outside Saint Paul’s Chapel at 209 Broadway.

–       Lower Manhattan residents will get free admission to the Tribute WTC Visitor Center at 120 Liberty Street from 4:30pm until 6:30pm. Also tomorrow.

–       The Brooklyn Museum will have on display an art installation at the entrance to the Luce Center for American Art, featuring the work of Michael Richards, who was killed in his study on the 92nd floor of Tower 1. The exhibit will be on display until October 30th, and will be open between 11am and 6pm.

–       In Weehawken, New Jersey the mayor of Weehawken will unveil a 9/11 memorial at the Port Imperial waterfront, just east of the River’s Edge Building at 1500 Avenue at Port Imperial.

–       In Battery Park the Flag of Heroes project will plant 3,000 American flags in front of the shattered globe from the World Trade Center plaza. The flags have the names of the dead from 9/11. You can see the exhibit until September 12th.

–       There will be a candlelight vigil at 7:30pm at McManus Memorial Park at 81st St. and Grand Central Parkway in Astoria Heights, Queens.

–       The Mercury Lounge will have its annual concert from 6pm to 9pm playing the “Music from Ground Zero.” 217 E. Houston Street.

–       There will be eight concerts held each hour at the Trinity Church on Broadway at Wall Street, beginning at 1pm.

–       In Staten Island The United in Memory 9/11 Victims Memorial Quilt will go on display at St. John’s University, 300 Howard Avenue, at 6pm. Viewing of the quilt will also be possible on Saturday and Sunday.

–       A Park Wall will be unveiled at 10:30am in Nesconset, Long Island at Gibbs Pond road and Smithtown Blvd: The Park there will be called the 9/11 Responders Remembered Park.

–       In DUMBO in Brooklyn ten artists will interact with the public at open-air sites creating original and unique 9/11 memorials at Pearl St. Triangle from 11am to 5pm.