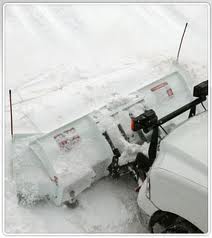 As snow continues to accumulate in the greater New York/New Jersey area, some people are finding it more and more difficult to cope. An incident which happened in Wayne, New Jersey points to the stress a long, cold, wet winter can cause. When the stress reaches the breaking point, it is being called by some “snow-plow rage.” The case in Wayne involved a man who had just dug his car out from under the latest snow fall. When he saw a snow plow coming his way, he went to the driver of the plow and asked him to not plow him back behind a wall of snow. The drive refused to stop, and in response the man threw a bucket full of salt at the driver. Luckily the bucket missed the driver, but it did do damage to the truck, breaking the window on the passenger side and denting the door.

Mr. Chuck D’Angelo says he is not happy about his actions that day, but he just lost it when he saw that he was about to get plowed under another pile of snow right after digging himself out.

As he said himself: “I wasn’t happy for my actions for that day. I was really annoyed at him and coming and plowing me straight in.”

Mr. D’Angelo was charged with criminal mischief, and tried to repair the damage later by offering to buy the driver a drink. It is not known whether the offer was accepted, but the driver’s wife is far from forgiving. As she said, “I could have lost a husband that night, just because this guy is angry that a little snow got onto his sidewalk.”