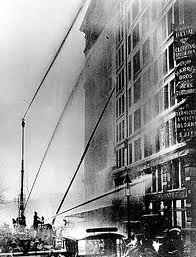 In the wake of the great New York City teacher’s strike of 1968, the history of unions was thoroughly taught to us 5th graders. Although I can’t say I remember much of what I was taught, the one item that has stayed with me for more than 40 years has been the tragedy of the Triangle Shirtwaist Factory fire. One of the things that we learned was that because of this tragic event of 1911, which took the lives of 146 people, the majority of which were young immigrant women, labor laws, building codes and politics were changed drastically, not unlike what the Titanic disaster did for all sea travel that followed.

The 100th anniversary of the fire will take place this coming March 25th and for the first time all 146 names of the victims will be read at the memorial ceremony.   The memorial will take place outside the building in Greenwich Village where the Triangle Shirt Waist Company was located, on the 8th-10th floors. Thanks to the intense, four year sleuthing of amateur genealogist Michael Hirsch, the names of final six victims whose identities had never before been conclusively known will now be honored at the memorial.