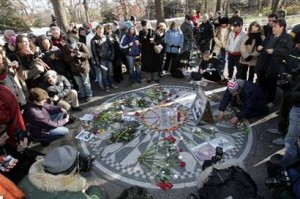 Ayrton “Gary” dos Santos, the ‘Mayor of Strawberry Fields’, lit two candles in Central Park to honor the memory of John Lennon on the 30th anniversary of the Beatle’s murder. Dos Santos had laid flowers there for seventeen years, and was watched this year by an enormous crowd of fans and journalists. “It is a sad day. It will always be a sad day” he said. “I will keep doing this for John until the day I die.”

Lennon’s black and white memorial bears the word ‘imagine’ after his most famous song. Rob Wilson, a 19 year old student of New Jersey, sat with his guitar a strummed Let it Be and Imagine, while people sang along. “John is the Jesus of music” he said. “He came here to save us. He still is.”

Strawberry Fields is located a mere 50 meters from the Dakota apartments where Lennon lived. In 1980, while on his way to bid his five year old son goodnight, he was shot. At the gathering yesterday, Rolling Stone released the full text of Lennon’s final interview with the magazine. He was quoted as saying that fame is “like idol worship. They only like the people when they’re on their way up. I cannot be on the way up again.” He added that “what they want are dead heroes, like Sid Vicious and James Dean. I’m not interested in being a dead hero. So forget ‘em.” Sadly, the choice was not his to make.