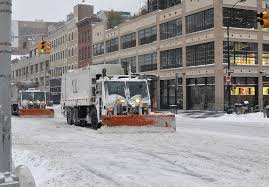 The first incident happened early last week at a Sheepshead Bay car dealership and was recorded on the store’s surveillance video. Employees opening the dealership arrived to find the front window broken. The video taken automatically while the dealer was closed show a man walking outside the store, on the sidewalk past the picture windows of the dealership. Then the video shows a snow plow passing by in the center of the street, followed by a second plow.   The second plow suddenly shoots flying snow toward the dealership’s windows. From the video it appeared that the man walking by was knocked down as the flying snow hits him.   A few seconds later the man gets up and continues walking.

The owner of the car leasing company, which is located at 2785 Coney Island Avenue, contacted the Department of Sanitation after seeing the video. The Sanitation Department told him they will pick up the tab for the broken window.

In an unrelated incident in Staten Island on Wednesday a snow plan caused a tree in the New Dorp section to topple over onto the roof of a house. Jim Krause, the owner of the house, said that,

“I know how close I came to be seriously hurt.”

As it is the tree damaged the gutters on the roof and cracked the front steps of Krause’s home. Just a few moments before the tree was knocked over Krause had entered his home with his stepson.