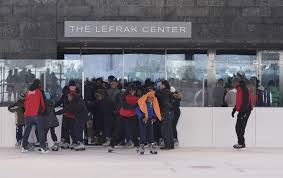 The week before Christmas last year saw the grand-opening of the $74 million LeFrak Center at Lakeside. During its opening first month alone over 40,000 skaters came to enjoy the beautiful new facility, which consists of 26 acres and 2 separate ice rinks.

Unfortunately it has not been smooth skating at the center. One of the rinks has had to close as many as 10 times due to mechanical issues with freezing the ice, while the other rink closed down for the same reason at least once.

“I’m outraged and I’m embarrassed for the Prospect Park Alliance that such a beautiful facility that we love has these problems” said the Brooklyn Blades’ co-director Kevin Gurl. “It’s a disgrace.”

It appears that the compressors are not functioning as they should be, and even when the rinks are open there are places on the ice blocked off with cones due to slushy, mushy ice conditions.

“There’s been a problem with the ice not freezing in a certain area” Gurl, 47, said.

The Brooklyn Blades, the local skating organization that calls LeFrak home, had to cancel a hockey game on February 2 because of “puddles of slush” on the covered rink. The open-air rink next to it was also closed for similar reasons.

The new rink brought back old memories of the dysfunctional Robert Moses-era Wollman rink, which was taken down in 2010 to make way for the modern facility. LeFrak was built with a combination of private and public funding.
Geoffrey Croft, president of New York City Park Advocates said,

“We don’t know if it was built properly or if this is an ongoing maintenance issue. Either way, this is a brand new, wonderful facility and these things should not be happening.”

The mechanical issues are not the only complaints skaters have, however. Members of the hockey team are disappointed that the facility was built without changing rooms and other standard accompaniments to a decent hockey rink.

“Any standard ice hockey facility would have benches and doors for players to access the ice during a game, and also a penalty area for when a player is penalized” said Bernard Rougerie, 55, of the Prospect Park Hockey Club.