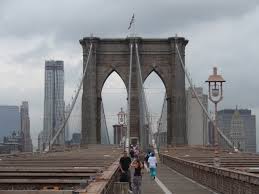 Tourists no longer need to actually purchase the Brooklyn Bridge in order to make it their own: all they need to do is climb it and take some amazing selfies atop the historic New York icon.

Take for example Yaroslav Kolchin, the 24-year-old Russian tourist who climbed the bridge one beautiful sunny day last summer and took a few self-incriminating self-portraits which then landed him some trouble with the law and a bit of jail time.

After sharing his pictures with the Daily News, Kolchin explained why he climbed the bridge.

“It was beautiful” he said. “It was the best point to look and enjoy the view.”

Kolchin is from Moscow and works as a manager for an ad agency there. He climbed the famous 276-foot Brooklyn-side tower on August 24th. He was arrested for his climb, and after a few days spent in jail paid his bail, and spent the next few months in and out of court.

“In Russia, this is normal thing to do” he said, referring to climbing the tower. “I was a little bit scared, but it was my last day in New York. I want to save memories of my trip and take beautiful pictures.”

Last week the case was finally resolved. Kolchin pleaded guilty to a misdemeanor which prohibits climbing on structures, receiving the punishment of having to perform 92 hours of community service, which he already fulfilled over the past few months.

“I met new people and contributed to the improvement of conditions for the life of the city” Kolchin said of his community service, which he performed in schools, parks and food pantries.