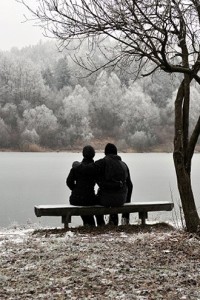 Though springtime is known as a season of love, it turns out that wintery December is actually top on the list of romantic months, at least in New York City.

It’s not so surprising, really, that the season is a popular one for popping the question. Filled with holiday excitement, romantic wintery scenes and endless family reunions, it’s really an optimal time.

Jake Nyberg, a video producer, chose to take the plunge this holiday season. He explained: “It’s a pretty time of year. You know you’re going to be around a lot of family. You’re going to be seeing all the people you’d like to see after something like this happens.”

Sarah Pease is a professional ‘proposal planner’ in the Big Apple. She confirmed that this season is indeed filled with engagements. She explains that she gets an average of two inquiries per week, but once Thanksgiving arrives she gets more than two every day. She added that most of the men consulting with her are planning to propose in December.

Winter, she says, is the perfect setting for a simple but romantic proposal, like the engagement-ring-under-the-tree trick. “That’s a great way to have it as a family affair” she explains. “It’s dreamy. This is definitely THE busiest time of the year.”

Other related businesses have confirmed the theory as well. DiamondIdeals.com’s Laurent Landau said “October, November and early December, we probably see a 50 to 60% increase in the number of people buying rings with the purpose of proposing during the holiday season.”

Celebrities like Matthew McConaughey and John Legend followed the trend as well, both announcing engagements around Christmastime.