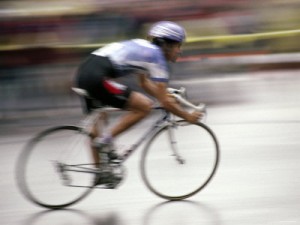 Over the past six months, several women were almost killed in collisions with cyclists in Prospect Park. Still, bike riders continue to ride at incredible speeds.

A reporter, armed with a radar gun, discovered that riders go as fast as 31mph, which is faster than the 25mph speed limit in the area. Many riders move that quickly through red lights at crosswalks, as well as through the crowded drives surrounding the parks.

This year, the NYPD has ticketed a mere 22 cyclists in the park, mainly for riding the wrong way or for “reckless operation.” This past weekend, park police officers set up a barricade and handed out prints of the rules for cycling in the park. No tickets were issued then.

According to Jennie Modica, a psychologist from Windsor Terrace, “The park is a danger zone because of these cyclists. The cyclists need to control themselves.”

Though Prospect Park deals with this issue on a regular basis, the conflict is not limited to there.

“They think they own the world” said Brooklyn resident Roberto Linares of the cyclists. “They’re overconfident.”

Dana Jacks, a Brooklyn actress, was hit by a cyclist and had to spend a month in the hospital. Her husband, Forrest Cicogni, explains that the “culture of racing” is a large threat, one which is not limited to cars.

“The cars are stopping at stoplights” he said. “The cyclists are not.”