Roads which have been called both “dilapidated” and in “critical need” of repair will not be getting their much needed overhauls due to the poor economy, say state and federal transportation officials.

BQE Not Getting Much-Needed Overhaul

A 1.5-mile section of the Brooklyn-Queens Expressway, from Atlantic Avenue to Sands Street in Brooklyn Heights was under consideration for anything from a 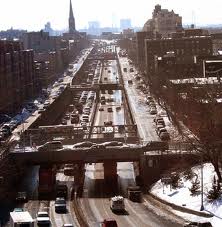 $280 million improvement to a variety of other proposals which would improve traffic with tunnels which could have cost upwards of $20 billion. The road is considered highly dilapidated, especially the part with two levels that creates incredible booming noises from under the Brooklyn Heights Promenade.

“Shocked” was the reaction of Judy Stanton, the Executive Director of the Brooklyn Heights Association when she heard that the state Department of Transportation and Federal Highway Administration no longer consider the BQE bad enough to required renovations.

“We assumed it was a necessity because they described the BQE as very deteriorated and substandard,” Stanton said. “But if all they are going to do is continue Band-Aid repair work at the city’s expense, it won’t be sufficient.”

Stanton stated that the number of complaints from homeowners living near the crumbling road concerning the noises and shaking coming from the road have been increasing as truck traffic climbs and the condition of the road just gets worse.

The officials at the state and federal levels have also decided to drop the planned work to fix a 3.8-mile length of the Gowanus Expressway, from Sixth Avenue to the Brooklyn Battery Tunnel. The estimated cost of overhauling the road ranged from $2 billion just for repairs, to a whopping $15 billion to build an underground tunnel to replace the elevated highway there.

Roy Sloane, an activist from Cobble Hill who has been fighting for years to get the BQE fixed up , said that the decision to halt all discussions of how to improve the highways is a blow to public safety.

“We were told by the state that the BQE was in danger of collapsing in the 80s,” said Sloane. “It’s also pathetic that they put all these years and effort in, spent money on all sorts of designs and are now dropping it.”

However, a state DOT spokesman said recent inspections of the two highways showed they “do not require major repairs at this time.”