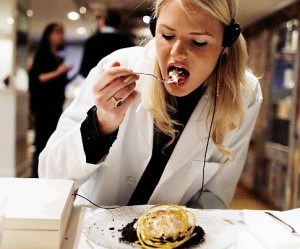 Park Avenue Winter, the New York restaurant that transforms its name, dÃ©cor and menu to coincide with the season, now has another unusual experience to add to its list. Executive chef Kevin Lasko has teamed up with various artists, including Marina Abramovic, Janine Antoni, Paul Ramirez Jonas and Michael Rakowitz, in an effort to bring edible art to his customers.

The first was the “Volcano Flambe” which was launched in January. The experience includes a set of headphones through which the diners listen to a recording of Marina Abramovic as she explains the mental and sensory aspects of the dessert dish. Every season, Lasko plans to introduce a new dish or experience.

In an interview with Reuters, Lasko explained the inspiration for the project:

Q: What was the impetus for this project?

A: “We had been working with Creative Time Consulting, which specializes in public-space art, to launch something with artists. Since we’re a seasonal restaurant, we thought of doing an art installation for each season, and it just went from there.”

Q: What was it like working with Marina, who had just finished an exhibit at The Museum of Modern Art (MOMA), where she sat facing patrons, staring in silence?

A: “Well, we started with complete artistic freedom, and didn’t say no to anything. She wanted to delve into textures and do a dessert. Her idea was an aphrodisiac, and then she wanted it to explode. But that’s difficult in a fine dining establishment where people dress for dinner.”

“Then she thought of a potion, and after four or five meeting, working with chocolate, bananas, almonds and things, we came up with our dessert. It’s dark chocolate ice cream with almond sponge cake and banana mousse covered in Swiss meringue. We surround it with dark chocolate crumbs and top it with spun sugar, then set it on fire with dark rum. It really wasn’t that ‘out there”™ for what she could have wanted to do.”