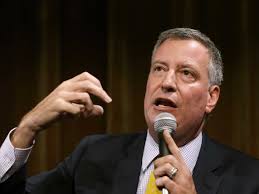 Despite the objections of small businesses, New York City Mayor Bill de Blasio signed into law a more inclusive version of the paid-sick-leave mandate which was enacted last year. Last year the private sector said that business expenses would increase as a result of the expanded law and vigorously voiced their opposition. This time around, however, facing the expanded law, the business community was less vocal. The only complaint came from the president of New York’s restaurant association, who voiced disappointment in the speed with which the mayor and the City Council sprung forward to quickly push through the larger 2013 law.

Mayor de Blasio said the expanded law was needed to include an additional 500,000 New Yorkers. Describing the importance of the expanded law, City Council Speaker Melissa Mark-Viverito said that now a low-wage employee who lost his wife and daughter in the recent East Harlem gas explosion can go visit his son in the hospital without having to worry that he might lose his job.

The law states that any business with as little as five workers must provide paid time off for them. The law does not officially go into effect until April 1, but for businesses with fewer than 19 employees there will be a six-month grace period until the city enforces the law.