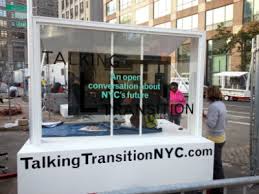 In what is surely a unique bid to incorporate New Yorkers into the political process, newly elected Mayor Bill de Blasio has initiated “Talking Transition.”

This city-wide “soap box” is being produced by a crew of consulting companies, including HR&A. Candace Damon of HR&A explains the thinking behind the plan:

“The idea is to engage people, both online and on Facebook pages, and via Twitter and Instagram and all the modern social media, as well as in person and actual conversations in this tent and in the neighborhoods, to talk about issues that are really concerning them,” Damon said.

This is a chance for New Yorkers who have always wanted to ‘change city hall”™ to do so; to have their voices actually heard. Citizens can fill out a survey, place a memo on a wall, or even record a short video.

So far the list of issues is broad and important: affordable housing, employment, and energy are among the concerns of people who have already added their two cents.

“I think it’s awesome,” said one resident. “It’s remarkable that we have a chance to actually put in ideas, input about how we think the city could be made better. I mean, what a great opportunity.”

The Talking Transition Tent will be found on Canal Street until November 23. Mobile units will also be traveling throughout all five boroughs. Join in without leaving the comfort of your residence by using the Twitter hashtag #talkingtransition or by filling out an online survey at talkingtransitionnyc.com.