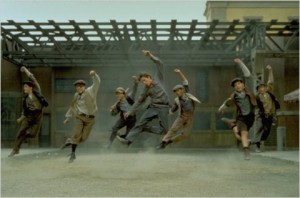 Disney Theatrical Productions recently announced its plans to release its new show “Newsies the Musical” in New York, for a three-month run this coming spring.

Disney usually spends years planning each show, and is known for spending millions of dollars on Broadway musicals like “The Lion King” and “Mary Poppins” as well as on advertising campaigns for both national and international tours.

“Newsies” is based on the 1992 Disney movie about the strike of NYC newsboys in 1899. The show had a critically acclaimed debut in New Jersey, and features Academy Award winner Alan Menlen, Jack Feldman and a book by Tony Award winner Harvey Fierstein.

Their release of “Newsies” reveals that Disney is starting small this year, after two recent, very costly, flops. This show will cost around $5 million, and will run at the Nederlander Theater. Depending on its success, the musical will continue to run past June.

Disney’s last two hits, “Tarzan” and “The Little Mermaid” were recognized as dramatic failures, sending the company on a cautious path to releasing its newest show. Both of the latest shows cost more than $14 million, and both closed before two years of performances had passed. Disney’s last success was “Mary Poppins” which opened five years ago and is still running.

Thomas Schumacher, president of Disney Theatrical, said the limited run does not imply that Disney can’t afford another flop. He noted that “The Lion King” and “Wicked” have been around more than a decade, and continue to be two of the most profitable shows in the industry.

“Since ‘Mary Poppins’ there have been 179 shows that have opened and closed and I don’t think the public is saying, well, one of the 179 was ‘The Little Mermaid’” Schumacher said. “Am I happy ‘Tarzan’ and ‘Mermaid’ didn’t run? No. But the average failure rate for Broadway shows is 75%. I can’t stop producing out of a fear of failure.”