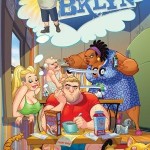 You may have to see it to believe it, but it’s really true.   Brooklyn is soon going to get its very own superhero — in the form of Captain Brooklyn.   According to the insider scoop from an article in The New York Post, Captain Brooklyn has superpowers from time spent in the Gowanus Canal, and he’s coming to Image Comics this spring.

Origin of the Idea

The idea for the fantastic series comes from Brooklyn natives, of course.   Tieri is creating the idea along with Jimmy Palmiotti and Palmiotti’s wife (the former “Supergirl” artist Amanda Conner).   The idea for the comic actually came about when Palmiotti and Conner were drinking in a bar. The comic will appear as a three-issue limited series and will focus only on the borough, with some stops in different neighborhoods.   Should it be a hit, Captain Brooklyn will return to check out more of the city and to wreak havoc in various places. As Tieri said about the place we all love,

“It’s a love letter to Brooklyn. It’s the second main star of the book.”