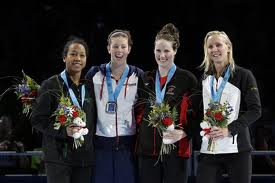 Lia Neal, who is the second African-American woman to ever swim on the US Olympic team, and at 17 years-old the youngest, was part or the US women’s relay team that captured third place in this coveted Olympic event.

Neal, who is also half Chinese, was part of the four-woman, 4X100-meter freestyle relay team also consisting of Missy Franklin, Jessica Hardy, and Allison Schmitt. Together the women finished the race with a time of 3:34.24. Neal swam the third of the four legs of the race in 53.65 seconds.

The Australian team took home the gold medal with an Olympic record-time of 3:33.15; and winning the silver was the Netherlands coming in at a fast 3:33.79 seconds.

said Neal, who is a senior at the Convent of the Sacred Heart high school on New York’s Upper East Side. The pool that she trains in, Asphalt Green, is close by.

Neal has been impressed with the support that she has been receiving for her achievement.

“Even people that I don’t know have been cheering for me,” she said.