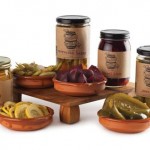 Many specialty food stores have gotten more creative lately — and Brooklyn Brine is no exception. Pulling beer off the shelf and throwing it into the vats, they’ve created a unique product called the Hop-Pickle. As Brooklyn Brine’s founder, Shamus Jones, said,

“We’re taking something that’s a pantry item and giving it the necessary breath of fresh air.”

The Hop-Pickles is actually the first time that a pickle company has tried using beer as part of its products. Brooklyn Brine already has other unique products from the Maple Bourbon Bread & Butter pickle to the Whiskey Sour Pickle. Now, the Hop-Pickles are hitting the local specialty stores at $10-$12 a jar.

At the Gowanus storefront, their first shop, they have whisky and bourbon barrels all along the walls. As he explains about his three year old enterprise,

“We’re keeping it creative, but keeping it palatable. It’s a nice alternative to more traditional pickles.”

Jones explained his love of their location. As he said, “New York is an artisan region for pickles. We’re right here on President St . It’s rewarding enough for people to come in and have that conversation to get them excited about what we’re doing.”

The idea for the beer-inspired pickles came when Sam Calagione, president and founder of Delaware’s Dogfish Head Craft Brewery came for a few Brooklyn Brine pickles. As he said, “I was blown away, with a little bit of each in my mouth, by how complementary they were in terms of being really earthy and pleasantly bitter. I immediately emailed Shamus.”

And a pickle partnership was born.