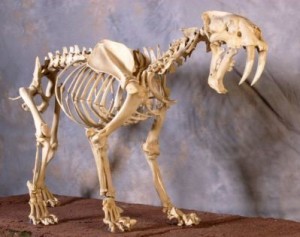 The curator of vertebrate paleontology at the New York State Museum in Albany, Dr. Robert Feranec, is to present “Ice Age Animals of New York” in the Carnahan Theater in Jamestown Community College later this week.

Throughout the presentation, Feranec will introduce the audience to some of the most famous as well as unknown species of ancient New York’s megafauna, including mammoths, seals, camels and saber-toothed tigers.

“Just 10,000 years ago in New York, we had mastodons, mammoths and even giant beavers and ground sloths. Not only are these animals fascinating to look at, but their extinction might also inform us about the effect of climate change and humans on nature today” Feranec said.

The presentation is co-sponsored by the Roger Tory Peterson Institute of Natural History and JCC Science Department, and coincides with the opening of the FOSSILS! exhibition at the institute.

Feranec specializes in studying the evolution of ecology in ancient mammals. He earned his Master’s degree at the University of Florida and his doctorate at the University of California at Berkeley. Throughout his career he has overseen excavations of mastodon fossils in New York State as well as studied other vertebrate remains, ranging from caves in Spain and seal bones along Lake Champlain.