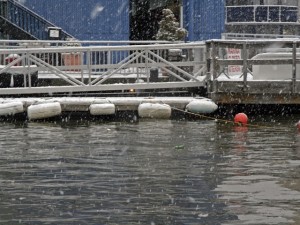 Officers from the harbor unit were alerted of the emergency on Friday morning. Mark Stoss lives on his sailboat Quid Pro Quo with Chloe, an eight year old dog. He said that he had been coming back aboard the boat when he “heard squeaking” from under the pier. “I just knew” he said. Moments later he saw her, her head barely above the water.

Stoss held his dog above the water while he called 911. He explained that he didn’t pull her up himself because he was worried she might have gotten caught on something beneath the surface.

Detective Matthew Sherman put on diving gear and jumped into the 20-foot-deep water to free the dog from beneath the pilings at Chelsea Piers. Detectives Michael Cocchie and John Drzal tossed a line from the police boat to pull them to safety. Chloe was very lucky; the water was 46 degrees with a high tide and a strong northern current that could’ve pulled the dog very far out.