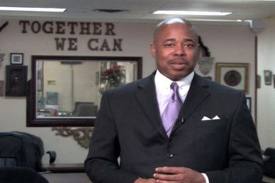 Fashion Week is just a few days away, and our dedicated leaders are doing what they can to get the word out. Or perhaps it has nothing to do with fashion week, and they are just teasing each other about who is the “fairest borough president” in New York, a la “Sleeping Beauty.”

Stating boldly only days after winning his seat as Brooklyn beep that he was the New York beep with the most fashion sense, Adams challenged the four other presidents at an event to promote NYC Fashion Week, which begins on March 13.

“If my two socks match with each other and/or my suit, I consider it a victory” said Oddo. “That said, I’m ready to challenge my colleagues to a pull up contest, and if that doesn’t work I’ll win the wiffle ball contest for sure.”

That left just Diaz as the sole challenger to Adams’ claims.

“No one is scared of Eric Adams over here” Diaz said. “He’s got to be careful about trying to proclaim that all of the best things come out of Brooklyn.”

But Adams held his ground. “Everyone knows that out of all the borough presidents, I’m the most fashionable” Adams declared.

Not everyone agrees, however, that New York’s leaders are such unmitigated fashion plates. Robert Verdi, for one, reacted to

the photographs of each BP dressed to the nines.

Verdi allowed that Adams’ pink tie was ‘smart”™ and he also approved of Diaz’s pattern-over-pattern layering. However, he felt they couldn’t go wrong with better fitting suits with more modern styling.

“In the space they’re in, this conservative fashion space, they could do a lot better with regular visits to Brooks Brothers” Verdi said.