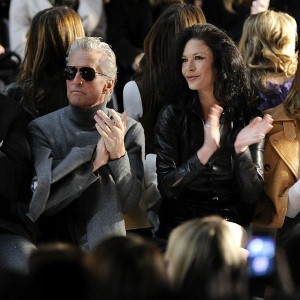 Many big stars participated in the organized chaos that was the Michael Kors New York Fashion Week Show this week. Some of the celebrity guests included Catherine Zeta-Jones, Debra Messing, Michael Douglas and Bette Midler.

“I came to fashion week exclusively for Michael Kors” said Messing. The actress’s attire was all by the designer. “He’s the real deal, he makes me feel confident, strong and effortless” she said. The two met and became friends when Jones wore one of Kors white blouses to a photo shoot early in her career.

Actress Anjelica Huston flew in for the Kors’ show as well. “It’s fashion for adults and kids alike” she said. After the show, she returned to LA to continue filming her latest flicks.

Kors’ models were laid back and actually smiled on the runway. “I don’t try to put people in a garment that’s not them” Kors explained, “even the models. For this show we matched their outfits to their skin tone. If you’re sporty, wear sporty. I don’t believe in the Cinderella look.”