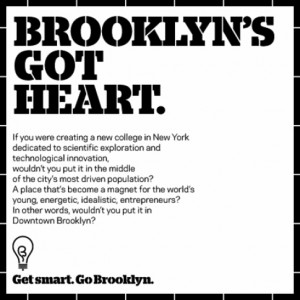 If you’ve noticed new advertisements around the neighborhood for a “genius school” you might wonder what is going on. Downtown Brooklyn has been covered, as of late, with an ad campaign that backs NYU’s bid to guild a school in their backyard. And it’s not just supposed to be any school. The ads, which start to appear today in both print and online, ask the city’s decision-makers to “Get Smart. Go Brooklyn.”

What they mean by this is that Brooklyn has so many well-educated residents that it’s the right place for a new school. NYU is trying to take over the MTA’s former headquarters that are on Jay Street to turn it into the Center for Urban Science and Progress. It would be a place for scientists and engineers to work on problems in cities around the world.

“This property has been a blight on downtown Brooklyn for over a decade. We have this terrific new proposal from NYU to turn it into something amazing.”

But nothing is set in stone yet. NYU is only one of the five universities that are bidding for the right to build the school. The winner will be eligible for both free land and for $100 million from the city. NYU has said that they would build in Brooklyn, and would do so for a fraction of the funds being requested by Stanford and Cornell, both of whom would build on Roosevelt Island.