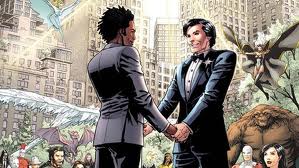 The issue of gay marriage has certainly been in the news lately, first in June when New York State legalized gay marriage and then more recently when President Barack Obama announced his support recently.

Now, Marvel Comics is getting further into the mix. They already have an openly gay member, Northstar from X-Men. Now, he’s going to be proposing to his boyfriend in “Astonishing X-Men #50” which will come to stores today. Wait for the next installment for their wedding, as Central Park will be used as the backdrop for their affair. Northstar came out as gay long ago in 1992, but this is certainly the first gay marriage taking place in the Marvel Comics world.

“When a major comic publisher like Marvel not only includes, but publicly celebrates, the legal wedding of two of its gay characters, it reflects how supporting same-sex couples has become the new normal. Readers expect to see their realities portrayed in these fictional worlds and today that includes married gay and lesbian couples.”

“A lot of our Marvel super heroes live in and around New York City so it just immediately became an issue we started thinking about.”
Certainly, this has become a trend in the comic book world. In 2010, Archie Comics brought an openly gay students to Riverdale High School, which was the first time they had done so in the character’s seven decade history.

Similarly, Dan DiDio, the editor in chief of DC Comics has recently mentioned at a London comic convention that one of the DC characters would soon jump out of the closet.