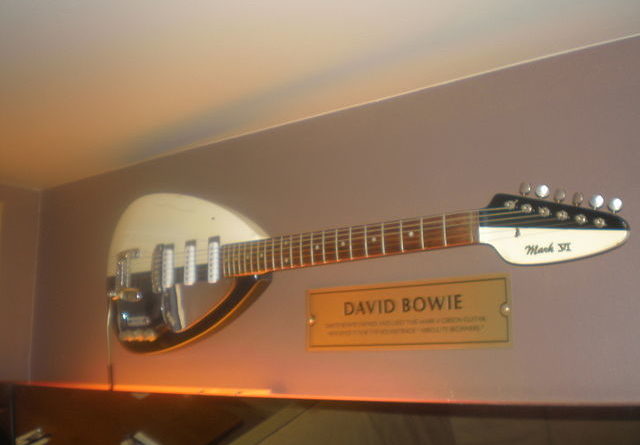 The enigmatic pop-culture superstar, David Bowie, died two years ago at the age of 69, but he lives on in his art and music which is celebrated now and until July 15 at the Brooklyn Museum.

Entitled “David Bowie Is…,” the open-ended moniker highlights the extraordinary depth and breadth of Bowie’s abilities. Bowie, who died of liver cancer on January 10, 2016, just two days post-birthday, was a musician, actor, videographer, fashion designer/pioneer, pop-culture theorist, and a man who could shock, and did not hesitate to push those envelopes.

Matthew Yokobosky, the Director of Exhibition Design at the museum explains that, “Bowie meant experimentation. He was about the freedom to try new things.”

The New York exhibit has its origins back in 2013 when Bowie was still alive, at the Victoria and Albert Museum in London. It began in the city Bowie began his career, and it will also be closing in the city where his life came to its premature end.

Bowie had a neatly organized collection of 75,000 artifacts from which curators of the show chose from for the exhibit. They picked 400 items, including over 50 costumes, sketches for costumes, notes for key lyrics that he wrote, and designs for his trail-blazing concerts.

Visitors are given headphones to guide them through the exhibit but are treated to much more than mere explanations. The audio features 36 entire Bowie songs, the first of which is a mash-up of 50 Bowie tunes arranged by his loyal producer Tony Visconti.

In support of the show the museum will screen Bowie-related films, host concerts, and even a dance which is already sold out. The dance, called “Night of a Thousand Bowies” will feature attendees dressed as one of David Bowie’s persona’s.

“People have this very personal thing about David,” said co-curator Geoffrey Marsh. “Everyone has their own version of who he was.”