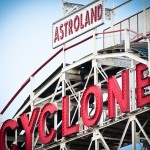 Yesterday was a day to celebrate on Coney Island as the Cyclone roller coaster turned 85. And what a bash it was! While the tickets for the ride are usually $8 a piece, passengers who enjoyed themselves there yesterday were able to ride for only $.25 from noon until 1:25 pm! This was to represent the cost of the ride when it first ran in June of 1927.

The Cyclone actually has the distinction of being one of the oldest wooden roller coasters still in use in the U.S. The ride is a total of 2,640 feet and it reaches a peak of 85 feet before it takes it major plunge at 60 miles an hour.

The ride gets a lot of attention each day, making sure that it remains safe for fun-goers. It is walked every morning to survey the wood and to make sure that everything is safe. As the ride’s operator told the AP, “It takes a lot of work to run a very old rollercoaster.”

As the Daily Mail described the adventure of riding The Cyclone,

“The ride begins with two train cars, filled with as many as 24 passengers, cautiously trekking up a hill of wooden tracks. The rattle of the ascent slowly grows louder. As the cars reach the coaster’s 85-foot peak, there’s a short pause – followed by a swift 60 mph plunge to the bottom that has made stomachs churn and eyes water since Calvin Coolidge was in the White House.”

The history of the Cyclone shows an interesting snapshot of American history. It rise during the 1920s, the height of America’s leisure culture. Its popularity dwindled during World War II, as Americans had much more on their minds and by the late 60s, it was almost condemned for a lack of riders and interest.

Residents actually rallied around the Cyclone and kept it from being condemned.   In 1971, the Cyclone was purchased by the City of New York and we reopened for business in 1975 to be operated by Central Amusement International. In 1988 it was declared an official landmark and by 1991 it was placed on the National Register of Historic Places.

It was a great day for the Cyclone and for Coney Island goers yesterday!