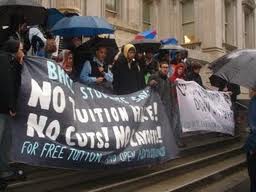 Back in 1969 a proposal to raise tuition at the City University of New York inspired 200 students to march onto the campus of Brooklyn College, break into the office of the President, throw a lampshade out the window, burn mail, smash furniture and tear out phone lines. Protesters high-tailed it before the police could arrive.

Those were the days of the civil rights movement and protests were physical and displayed in the most public and dramatic of ways. Today protests are conducted less noisily, but perhaps with better impact.

Today students at the same institution, CUNY, are faced with a 5% rise in their tuition. They are mad, but they are taking their rage to the channels of civilized protest, the courts. Six CUNY students marched over to the State Supreme Court in Manhattan last Friday and did the democratic version of slashing the governor’s tires; they filed a lawsuit.