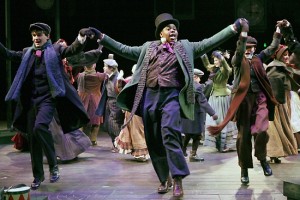 Two teens from Lynn were given the opportunity to perform in this year’s “A Christmas Carol” a professional production at North Shore Music Theatre (NSMT). They both auditioned in October, and battled some impressive competition; the cast is made up mostly of former Broadway performers, all of whom have over a decade of experience in theatre. Alex Newell,18, and DJ Plunkett, 17, have both participated in several productions, primarily youth productions at NSMT.

Plunkett explained that this year’s audition was much more difficult “because we had to audition at the adult male audition. It was more nerve-wracking knowing that we were auditioning with men who have performed in New York on Broadway and are veterans of the stage” he said. He got the roles of boy Scrooge and teen caroler in the performance this year. Newell will be performing as a teen caroler as well.

Plunkett added that NSMT is the theatre which initiated his interest in acting. “It’s really surreal to me to be on this stage” he explained. “I remember going to see Cathy Rigby in ‘Peter Pan’ when I was little and saying ‘I want to do that.’” Newell said that for him it was ‘The Wiz”™ at age five. “I was like ‘Wow, I want to do that when I’m older. I want to sing and dance and act.’” He added that the veteran actors in the Christmas Carol cast have taken the boys under their wings, and have taught them new techniques already.