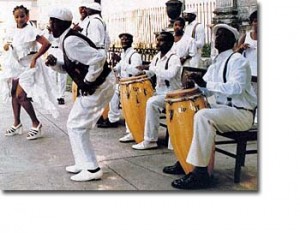 Cultural relations between the US and Cuba seem to be improving. A festival celebrating and presenting Cuban arts is soon to take place in New York City, and it will go on for two months. Starting on March 31st, the festival includes performances from the Cuban rumba and dance group Los Munequitos de Matanzas and Afro-Caribbean dance combined with classical European ballet troupe Contemporanea de Cuba, as well as exhibits from the socially conscious photographers Adonis Flores and Cirenaica Moreira. Dozens of performers and artists are expected to arrive from Cuba for the event, showcasing everything including music, film, painting, theater, film, literature and photography.

Karen Brooks Hopkins of the Brooklyn Academy of Music said “We felt this was the right time to do this, and New York the right place. There’s an optimism in the air about freeing up more interactions, which makes things feel very different than they did during the Bush administration and offers an opportunity for all of us to present work of a really high level in concentrated form.”

Ben Rodriguez-Cubenas, a Cuban-American and chairman of the Cuban Artists Fund said “Cuba has always had a vibrant arts scene and Americans are now rediscovering that.”