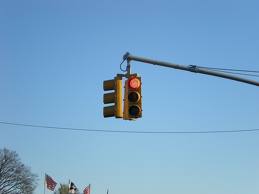 The corner of Kings Highway and East 34th Street in Brooklyn is a place where drivers don’t know there “stop” from their “go” according locals, who have been busy videotaping vagrant violations of the law by cars going straight through red lights.

The dangerous problem was investigated last Friday by CBS reporter Dave Carlin who observed driver after driver going through the light. In several videos locals shared with Carlin viewers can see an ice cream truck ignoring the light, as well as another driver who was in such a hurry to get through the light that Department of Transportation property suffered damage.   A school bus was even reported to have violated the law at that intersection.

Area residents who are well-informed about that particular intersection gave drivers the benefit of the doubt; however, saying that because of the multi-colored row of traffic lights appearing at the intersection it is possible to not even realize you are driving through a red light.

A spokeswoman for DOT said that “Safety is DOT’s first priority. The agency is looking at the location to see if additional signage can enhance safety.”